I wear them. Unless they were actually autographed or something I don't really see much point in not using them for their intended purpose.

I've always liked collecting shirts anyway, I have tons of the bloody things even if you don't include the Kalafina ones. Benefit of that is that more shirts equals less time wearing each shirt, which equals less regular wear and tear, which means they last longer. Coupled with taking care of them, chances are none of these will start showing any proper signs of degradation for well over a decade.

It's only the Red Moon shirt that is in a worrying state and I've had that for over five years now, plus it was my only Kalafina shirt for more than three and got a LOT of wear.
T

I got a package today! Here is what I got: 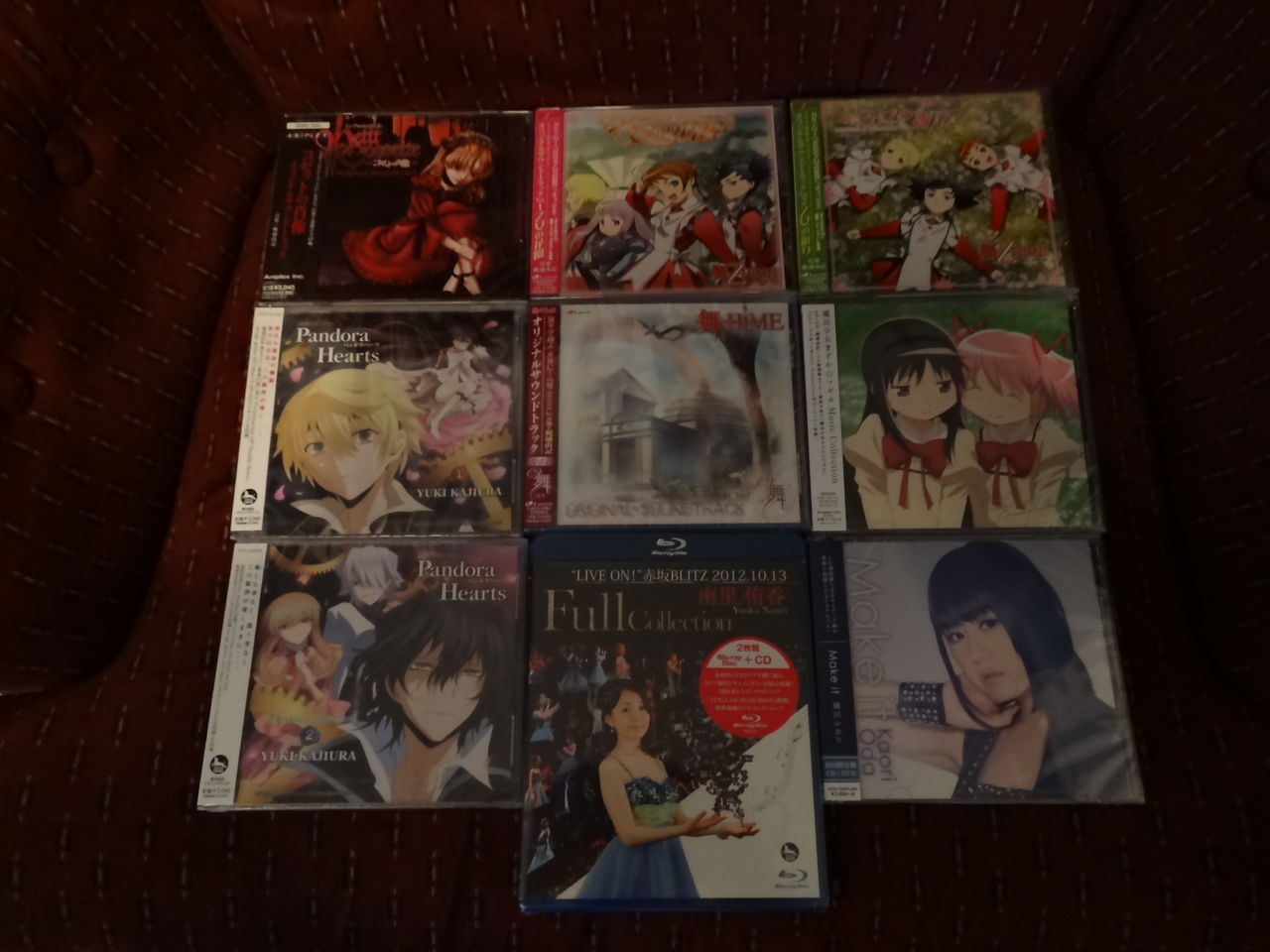 I basically just grabbed every YK soundtrack I could find on CD Japan.
I'm very happy that they still had the Le Portrait de Petit Cossette OST, that soundtrack is pretty high on my list.
The Yuuka concert has tempted me for a long time now, so I finally decided to get it.
And after two solid solo albums from Kaori Oda I of course had to get the third one too. =D
S

@T-rond I quite enjoyed the Yuuka Nanri live blu-ray, I trust that you will also.
L

They were all selling around their original retail price too $15 each and the photos show the condition is perfect.

They have a bunch of other things too, perfume singles and lots of the more recent Kalafina anime singles too.

I snapped up a bargain wooo!!

Not too bad, but you can get most of the LE's pretty regularly from Surugu-ya for about a third of that price. I got my LE copies of Hikari Furu, To the Beginning, Magia and Sprinter/ARIA from there and other than Sprinter/ARIA not having an obi, they were in perfect condition. Due to being in a batch with a couple of other things, even shipping and proxy fees probably came out as less than that per single.

On topic again (and slightly relevant again) I just got my LE copy of Fairytale and the LE Box edition Oblivious through. Sadly no obi for Oblivious but otherwise it's in perfect condition, as is Fairytale, and they also still have the Kara no Kyoukai square postcards included. Not too shabby for a total of 470 yen for the two of them. Also with that it means I do have copies of every single Kalafina has released (other than Heavenly Blue but I really don't care, with it's stock promotional Aldnoah cover and no b-sides), although I still need to replace my copy of Progressive with the LE at some point, I want that live footage. Sadly Sprinter/ARIA, Oblivious and Hikari no Senritsu don't have obis, but the others all do. I also have both versions of Alleluia for all the Christmas Live songs.

Next fall It'll be 2 years since I discovered my favorite artist Kajiura-San next to Revo. Currently, I only have FOTW, OL vinyls and SAO Music Collection. Anyway, I'm planning to grow up a Kajiuran collection next fall, but I have a couple of questions. What is the difference limited and regular releases, beside the DVD/BD? Do they worth it, especially now that some of them become more expensive?. Also, I would like to know if Fictionjunction Club vols are mostely photos (like Sound Horizon's)?. Finally, why are Oblivious and Progressive's limiteds too expensive?
Last edited by a moderator: Jun 7, 2016
S

Most LE's have different cover art and a BD/DVD with the video on. Albums often have a bigger box with a photobook too. Unless you really want the videos on physical format or vastly prefer the cover arts they probably aren't worth it unless you can get them cheap, although if you're okay getting secondhand stuff and are willing to deal with proxy services, you can get most LE's for below the RRP of the RE's.

As far as I'm aware, the FictionJunction singles follow similar rules as the Kalafina ones.

There is an archive of the materials of the FJC pamphlets around that someone's been uploading over on tumblr, they've got most of the volumes released so far. From what I can tell, it seems to be heavy on photos with a lot of backstage shots and making of style material, plus some interviews, information about upcoming releases and lives and the like.

Oblivious LE is not expensive if you go secondhand, it's about the same as the others. Re/oblivious on the other hand, is more expensive. This is because it was a very limited release and as far as I'm aware has not had a rerelease at any time, so it's not as easy to come by. It's also technically an EP, so it'd be naturally more than a single anyway.

Progressive LE is expensive because unlike every other single, it has some early Kalafina live performance footage on the bonus DVD which is not available elsewhere.
R

Thank you very much for the information. It seams I will go for limited albums while I will pick the covers I like of the singles.
Can someone tell me the releases that has more Keiko please even if regular.

Do you mean more Keiko pics? I can't remember exactly. If I recall, from TTB onwards they started using solo photos on the back of the booklet for singles, with Keiko appearing on the Regular editions? I'm sure someone else can confirm. Lacrimosa and Oblivious RE's have Keiko on the cover (with their LE's having Wakana, I don't know why they did that for Lacrimosa since Hikaru was already there) for what it's worth.

Other than that, it's a pretty even spread as you'd expect.
L

It's also important to note the LE of FOTW includes live footage too, so it's probably worth picking it up.

Fun fact: someone is selling a signed copy of AE for a ridiculous price on ebay
L

A friend of mine has kindly offered to hold some items for me while I'm away. With that I got the limited edition of Oblivious with the postcards, box and obi.
There's also an auction of the Fairytale LE which is currently at $7AUD (guess who's winning that one so far.)

Meanwhile, my friend in The US will hold almost all my collection which should be on the way (I'll wait till next Septtember!).

Anyway, I'm happy since I found second handed SH and AE limiteds for good price (cuz their prices on Amazon JP which I usually use are ridiculous!).

Also, I'm facing some kind of problem. My friend will be home around the time Blaze released, and I want to pre-order both regular and LP editions...so I guess I'll use the slowest shipping option to my Uni address.
Last edited by a moderator: Jun 13, 2016
L

Guess what came today?! The limited editions of Sprinter/Aria and Kagayaku!
They're in perfect condition. No scratches, all obi's. S/A even came with the first press postcards and Kagayaku came with the FJ Club card. They were packaged really well too and arrived faster than expected.
I'm just all round impressed.

Also still winning that Fairytale LE. The other person always bids while I'm asleep. 2 more days to go though.

@rsultan59 in my experience the slowest CDJ shipping option takes a month and longer than their FAQ suggests by about a week. as long as your not gone for a month you should be good.
R

@LacrimosaRaven
I've selected SAL reg. I don't know if it's the one you're talking about. Because according to some experiences Air mail takes the time as EMS while SAL might arrive as fast as 10 days. Anyway, I'll be able to recieve stuff on my mail after 10 days of the release date.

SAL can arrive in 4 days or so, or 4 weeks. It's odd like that. Sadly it's usually the latter.
R

Unfortunately....However, I don't have another choice honestly because the LP is already sold out at Amazon!
Y

the only kajiura merchandise i own is fiction ii

Yui Makino said:
the only kajiura merchandise i own is fiction ii

i would like to purchase her Sword Art Online soundtrack i have never watched it but i heard it is very good please recommend
Click to expand...

The soundtrack is good (not her best work imo). However, it contain a lot of material, and the release itself is beautiful and well made.
You must log in or register to reply here.
Share:
Share
Top