Updates to the interviews page

It's been forever since I've been on here and I have new stuff I can add. Note you can also find these in the database link below. Just click the image in my signature. You can find there a bunch of pamphlets, including almost every single FictionJunction newsletter to date. I now have every single one. It's just getting off my butt and scanning 1-4. I'm also a member of FictionJunction Station, so while I won't provide the Japanese text to some of her posts publicly, if someone wants to translate a few, I'm happy to send that person the text. One seems to go into detail on how she went about some of her latest work and the recording process.

I decided to repost the following on my minds account as it's less of a load time than tumblr.
https://www.minds.com/MistressOfTheObvious

note these ones I found and did not scan myself:
B-Pass May 2017
B-Pass Septermber 2017
Madoka Magica: You Are Not Alone Guidebook
Newtype April 2012
Weekly Playboy 10 February 2015 (includes link to a translation provided by kuroiyuki88) - warning adult

Thanks so much! Please dont delete any since i ll look at them in about a month (busy with exams)
M

Some of the more recent online interviews with Yuki Kajiura.

Added some more. Some I know you already have. Apologies for the double post, my logic was that those were internet interviews and these are paper ones. The following are all ones I found and did not scan myself.

Also on my Minds account is FictionJunction Extra, Salon de Horizon 13 (recap of Dream Port), and Lisani! Live 2011 with Kalafina and Yuuka Nanri, which I scanned. I'll go through all my stuff and see what has interviews. Just about every FictionJunction newsletter has an interview and a lot of the pamphlets as well.

You literally posted more the second I was about to say "thanks, I downloaded all of it!" Damn YK looks so young on the cover of Anican R Music 5.

Also I can be wrong but your 'Newtype Archive' link was taken down
Last edited by a moderator: Jan 22, 2019
M

No. It's still there. I had to change the link for the Kera archive since I updated that one. I wasn't aware of Newtype March 2009's error. I fixed the link now. Thanks.
M

Sorry I've been gone for a long time. It's been an unusually cold and wet winter and spring, leaving me wracked with migraines. I haven't even partaken much in the discord lately because of it. Anyway, finally updated my site. Here's the link: https://www.minds.com/MistressOfTheObvious

The Madoka Magica fandom is good about scanning things.

Related but with no Yuki Kajiura or Kalafina interviews:
Kalafina Live The Best 2015 "Red Day" & "Blue Day" Live Photo Book (just pretty photos here)
Harmony Volume 4 (this is after the breakup with just Hikaru and Wakana - this is also a repost to the Minds account)
Harmony Volume 6 (this is just Wakana)

Unrelated:
V!nyl Syndicate: Sex Pot Revenge October 12 2010 Volume 21 (came in a lot with the V!nyl Syndicate issue of Kalafina - also a repost to the Minds account)

Feel free to click my signature for other downloads.
M

More stuff here. Most are transfers to Minds, but I have a few new ones.

Mistress Of The Obvious (@MistressOfTheObvious)

Ruler Of All Things Obvious. Fan of Kalafina, FictionJunction, and Yuki Kajiura.

Every single Harmony issue is now available. I have the completed scans for the last few FictionJunction Club newsletters done, which means every single issue of that will have been scanned and available. Some I'm not happy with the quality that are older ones, so I might do clean up and re-scan some of them. They're all currently active in the link on my banner signature.

I also have a youtube channel dedicated to finding all the video interviews I can find on various sites and ones I have in my archive and uploading them. You can see it here: https://www.youtube.com/channel/UCZemdDYLKMYGSG5EImMQYuw

Content so far:
Star Light - the movie Keiko was in when she was 15, with just a cut of her
Star Light - DVD extras cut focused on Keiko
Tokyo Number 1 Kawaii Radio: Kalafina - promotion for the Best of Red and Best of Blue albums
A & G Artist Zone: Takeshi Washizaki's 2h with guest Yuki Kajiura - promotion for Elemental
A & G Artist Zone: Kaori Oda's The Catch - Episode #30 (10/28/15) - Kaori cosplays as beer and tries a pumpkin flavored one
Kalafina "Far On The Water" Live Tour 2016 Shanghai Press Conference (Chinese Subtitles)
Kalafina "The Best of Red & Blue" Release Live Talk at Nico Fare
MBS Radio Utagumi Smile x Songs with Kalafina - promotion for "Alleluia"
WKTK The Frame: Kalafina Interview - promotion for "Blaze" and the Arena tour
Kaori Oda's More Colorful Mode Radio Show: with Yuriko Kaida Episodes #131-134 (one with all the episodes together and episodes 131 to 134 separate like originally aired) - promotion for Yuriko's "My Hometown"
Hikaru Masai's Interview with Spice - the recent livestream that was up until July 9th
Kalafina Club: Episode 6/30/2015

I am bad at using minds. I already have followed your stuff for quite a while and I'm basically looking to grab all the 'new' stuff but actually I can't find them for some reason, it doesn't help there is no good search feature on there. Plz help locate them.

I found your stuff more up to date on here it seems, in case anyone is looking:

Yeah, I'm moving my old Tumblr stuff over to Minds. It's not more up to date, it just has more older stuff until I transfer everything over there. Actually, the most up to date place to get my stuff is here. 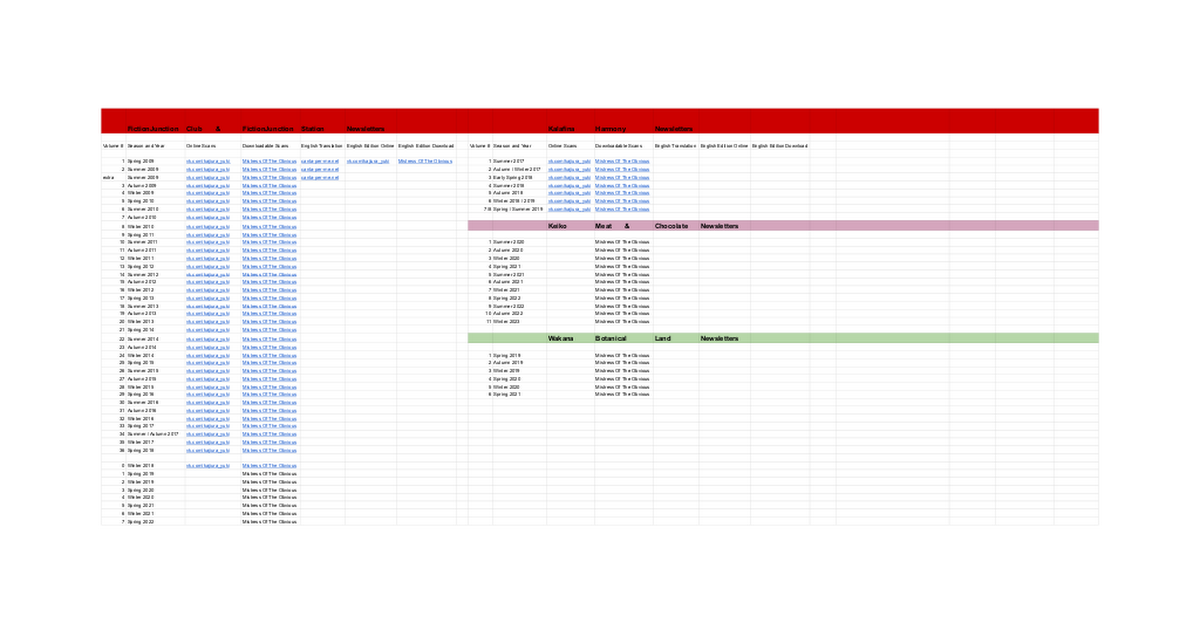 That link above has a new better version of FictionJunction Club 1 for download, as well as FictionJunction Club 2-4. I haven't put them on any site yet. I still have to go through some of my old scans because I'm not happy with the quality. I'll keep you all updated on any ones I fix with the new link. You can also see my collection of all the books I have and plan to scan.

I can give you the individual links on Minds though.

Thank you! I didn't expect such a big response, actually I had all your things except the 'new' so far, so I hope others take advantage of this. That said I am grabbing the 4 FJ Club new rips you mentioned. I am glad you did these because I did find that some of the older rips around were too small to get a proper look at them.

Seeing how good the automated translations have become (esp of this site https://www.deepl.com/translator, sample: https://forum.canta-per-me.net/threads/kajiura-family-media-appearances.3228/post-323916), how about about we make automated translations of all the still untranslated interviews ? At least until someone human wants to make his/her own.

Thanks @ Mistress Of The Obvious !

Yes it would be good to keep a track of all interviews with small summaries too. The "Interviews" section hasn't been updated this year and I think there's like a dozen of them ^^