grunty said:
KARA NO KYOUKAI
While I'm procrastinating on finishing Erementar and Pandora guides, have some unreleased rips from the Garden of sinners. Mixed from the available Blu-Ray 5.1 audio. Additional file with some lq audio extracted from the official site. "cpm"
Code:
Code:
PS. If you care for 5.1 rips of the available Karafina theme songs (KNK and Madoka), lemme know. Sat on them for a couple of days now and I think I'm fine with how the edited intros sound.
Click to expand...

I do.. I want the kalafina vocals only and chorus only

wat11 said:
that sfx covers a delicious part in communication breakdown... that is why I had said in this forum that someone should hack the computer!!
Click to expand...


tsubasa said:
I do.. I want the kalafina vocals only and chorus only
Click to expand...

I'm not sure these would be what you want/expect but I sent a PM. 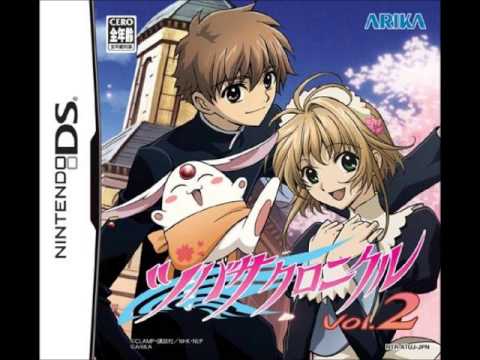 This music wasnt released in any of the four future soundscapes,but was used in the game Tsubasa Chronicle Volume 2

this BGM was on the lake ep on season 1 and first ep of Tsubasa Tokyo,...

It doesnt remind me of anything though.


Btw i had no idea there was game. Googled and it seems like it was just a poor quality cash grab game with rock paper scissors battle system

Oh yeah, I membah that track.


george1234 said:
Btw i had no idea there was game. Googled and it seems like it was just a poor quality cash grab game with rock paper scissors battle system

Sadly, most games based on anime are low quality cash grabs.


Sadly, most games based on anime are low quality cash grabs.
Click to expand...

True dat..sad its been almost a decade.. those damn tracks are not yet released

I remember seeing Tsubasa as it came out and now I feel old. Back when anime was allowed to have good music in it still.

DOUBLE CAST
My complete gamerip for the 1998 Playstation game with music by Yuki Kajiura. The soundtrack CD release is pretty good (having interval & accident as exclusive tracks and with many tracks being mixed differently) but there's still more music in the game. Both are recommended.

The file naming is straight from the game and every track that has a loop is looped twice before fading out. "cpm"


As this rip makes use of unaltered (but "remuxed") game data, you will need a player that supports PSF files. I could upload a transcoded mp3 version of these game files but they would be like 20+ times bigger.

If you're using foobar for your audio it should work perfectly fine with either the foo_psf or foo_input_aopsf plugins.
Code:
If you're using another player try your luck here as per george's suggestion:
Code:

george1234 said:
For those who have linux, download a player called audacious to play psf. I found it for yuki.n and it works :)
Click to expand...

My rip is from the PSX version of the game and uses the Mark Grass Generic PSF Driver rather than the original one (by my choice due to what I believe being playback glitches).

Double Cast also has a PSP port with transcoded music files (rather than the PSX music data). The mix on those transcodes is probably closer to how it would sound on CD but they cut off at 16kHz unlike the PSF files so I didn't bother uploading (they are also ready to play if you have the games and vgmstream). They also have those playback glitches with the original driver.
Code:
Originally posted in the Pre-2008 Soundtrack thread.
Last edited: Apr 15, 2020

MEGURI AISHITE
My complete gamerip for the 1999 Playstation game with music by Yuki Kajiura. There was no soundtrack CD released for this game. Yuki Kajiura was also responsible for the 2 songs appearing in the game - Koi no Kiseki by Saeko Chiba (the original single version) and Soba ni Ite by Tatsumi Hoshikawa (performed 3 years later by Saeko Chiba with a new arrange). Rips included in a seperate file.

The file naming is unfortunately not from the game - the files are named as they appeared in game data with soundbank first and track sequence second. Every track that has a loop is looped twice before fading out. "cpm"


For help with playback of PSF files please look in the Double Cast post above.
Code:
Originally posted in the Pre-2008 Soundtrack thread.
Last edited: Apr 15, 2020

BLOOD THE LAST VAMPIRE
My complete gamerip for the 2000 Playstation 2 game with music by Yuki Kajiura. The soundtrack CD seems like a decent presentation but there's more in the game, repetitive as it might be.
Rip also includes the non-YK ending song, Ashita no Basho, because I forgot to remove it. It's probably the best thing about this particular soundtrack anyways so. :)

The file naming is straight from the game (with v2's added for tracks which had the same filenames on the two game CDs but weren't actually the exact same). Every track that has a loop is looped twice before fading out. "cpm"


You will need a player that supports PSF2 files. Read more in the Double Cast post above.

Like Double Cast, BLOOD also received a PSP port years later with transcoded music files. Interestingly enough BLOOD's transcodes don't feature reverb at all. I believe that to be incorrect (comparing to the CD and youtube gameplay captures) so I set a reverb for my rip. Sadly, possibly for reasons listed below, the reverbation is a little janky - it seems to distort the audio samples. Still, I thought it was for the best to have reverb.

Unfortunately I couldn't get sound modules from BLOOD's discs to work so I used modules from the DNAngel PS2 game instead. It seems to have worked well (from what I remember only one instrument sounded different in the PSP port and even with that I don't know if it's because of the sound module or some other reason) but I suspect the reverb might be janky because of that. "Oh well". If I ever figure something out, I'll get back to it.
Code:
Originally posted in the Pre-2008 Soundtrack thread.
Last edited: Apr 15, 2020

I fixed all the links and added game rips just to have all of my rips in a single thread. Nothing is new if you'd already downloaded them before.

Friendly reminder that all audio uploads are on mega. To use the links from each post, take the 2 lines with exclamation marks which are in musicks code and add them after:

Code:
The passwords for archives should also be in every post in quotation marks.

PS. @george1234 / @Kugayama If you could change the thread title to "The Yuki Kajiura Anime & Game Music Guide", I'd be ever so grateful.

I will when i get on my pc

Xenosaga Episode III: Also Sprach Zarathustra MUSIC GUIDE with XIItoIII a missing year
Rip for the 3rd game from the Xenosaga series, as well as the ?unfinished web series "a missing year". Both with music from Yuki Kajiura. Both CDs on Xenosaga3 OST being under 60minutes each is a joke considering how much unreleased stuff there is.

X2to3 rip is .mp3 files extracted from .SWF flash files with (hopefully) original track names where possible (everything but one cutscene audio). Quality is shit.

Episode 3 is split up in two archives of .adx audio files: one with ALL in-game BGM loops and one with selected cutscenes (featuring unreleased tracks which weren't in the BGM set). Filenames according to xenosaga tools (with added titles of the released tracks) - considering M01 matches up with X2to3 M01 I'm hoping they might be correct (M32 is different but since it was the ending song in 2to3 it might be a special case... Well, don't think we'll ever know for sure... If you prefer fan titles, I listed the ones I found below). Quality is slightly less shitty.
For playback you might need vgmstream or another .adx plugin for your player of choice.

Thanks to @Lorde-Kowz for halp. Feel free to point out stuff to correct.
Last edited: Apr 15, 2020
W

thanks grunty !! they do.

s072900 also never released but one of the better tracks.

either george or I stripped the vocals out of these tracks once; can't find them now.

Thanks guronty~ It's asking for decryption key. Anyone else?