I thought that we can expect the live performance with Shinji Tanimura on Special Final - surprise song. It would be so interesting!

I think a performance in a Kalafina show is unlikely since its Tanimura featuring Kalafina and not the other wat around and in that sense it should be Kalafina going as guests to Tanimura performance.
S

I remembered Shinji-san praised Kalafina for their awesome performance in Music Fair and mentioned it in his blog (last year) that he wants to perform again with the girls one day. And here it is! :D

Keiko's first solo line is gorgeous, Hikaru's cutesy voice sounds unique to me and Wakana sounds pretty good to me. Tanimura-san must be so happy for this dream song, lol XD

comments from the artists: http://www.bs4.jp/alshira/p_message.html

If google translate is correct he says that "Alcira" is the ancient arabic name for the "Sirius" star, and its the brightest star, closest to Subaru, and if you wish something it might come true (?).
N

I think it's possible that Tanimura appear on Special Final and they sing together new song.

nodame89 said:
I think it's possible that Tanimura appear on Special Final and they sing together new song.
Click to expand...

I wouldn't really appreciate such an arrangement. This song is cute and they sound nice and all but it is far from the "Kalafina" image. Some people may argue that kalafina's image is ever changing. But this song is just NOT what they're about.

^ you shouldnt really expect a Kalafina image from a song where Kajiura isnt involved. and speaking of the image, it has broaden way to much over the years. It was goth until lacrimosa, then became lighter with storia and darker with lirica and more disco with progressive and has been going dark and light since then, with them having some songs that dont really belong to the anime style, like mune no yukue, i have a dream, samidare, so i think they have started going closer to mainstream to appeal to bigger part of the audience, which now also includes foreigners.

^ Pointing out individual songs doesn't really determine their overall image, though. storia and lirica were in the same single, so saying it became lighter with storia and darker with lirica doesn't really make much sense. I've always seen image when grouping a certain era's songs together (and looking at their styles).
Tbh, I'm not really sure what I consider Kalafina's image to be anymore because you're right, they have been focusing on a more mainstream appeal (which is not necessarily a bad thing, just it sometimes heads into formulaic/generic territory). When I think of Kalafina, I think more of their songs from seventh heaven and red moon, but that could just be because I've been a fan since before after eden came out. Not sure how I'd really describe it... They had a 'darker', more 'otherworldly' look (take these words with some fluidity) and their songs were... grander? I'm failing on describing this. But it was different.

Circling back to the original point, Kalafina sounds great in the collab and it's a cute song, though I see where Atlas is coming from. Still it sounds kinda fresh to me, in relation to some recent songs.
S

It doesn't sound like Kalafina's regular stuff, but that's actually why I like it so much. I love the regular Kalafina style (obviously) but with their most recent singles sounding somewhat similar, it's good to have something shiny and truly different to usual with their glorious vocals.

All I said was that I wouldn't appreciate this being performed during the Special Final. Who said anything about me expecting it to HAVE a Kalafina image? And thank you for stating the obvious about it being composed by Takanamura.

Just to reword my opinion a bit: I don't DISLIKE this song. I had already voiced my opinion about HIKARU sounding amazing. I also caught myself humming the melody of this song yesterday

And I'm happy they are broadening their scopes and appealing to different audiences. Their image is no longer that "mysteriousness" from seventh heaven. They have now surfaced

if you thought its obvious why did you menthion Kalafina image then in the first place ?
N

Atlas Star said:
Their image is no longer that "mysteriousness" from seventh heaven. They have now surfaced
Click to expand...

It was inevitable.
L

I feel like consolation kept some of that mystery. I feel like they have a grand image rather than a mysterious one now. Especially with the rococo themed logos and backdrop for the new 8th ani CD. FOTW though, I don't really know what kind of image that is.
N

Kala-girls are good known and recognizable because they are popular now. If they weren't popular they wouldn't make live in Budokan, we wouldn't see them in tv, read interviews with them, etc.

Kalafina's image in FOW reminds me water nymphs and mysticism.
Serious I have enough saying that FOW is bad, etc... It's boring, you know?

george1234 said:
if you thought its obvious why did you menthion Kalafina image then in the first place ?
Click to expand...

οκ understood, i didnt remember the quote when i wrote that, im sorry. You dont have to write it in japanese XD

I doubt it would be played at their final live but maybe they would be a guest if he had a live show? I am not sure how popular he is, but he seems pretty well known. Since it is composed by him and not Kajiura. I like it after the second listen. Though I don't really like the very beginning, unless that's not part of the song. (Also it's times like this I wish Keiko would get some higher parts in songs. I mean, she had Alleluia and Samidare, but she can sing like this and still sound amazing. Even I don't really care for her "cutesy" (as some people call it) voice but here it's pretty.)
S 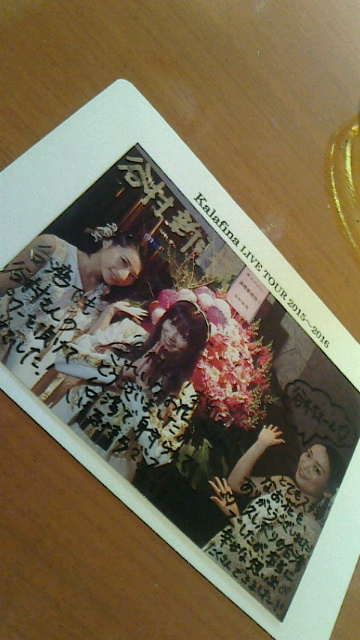 According to a flier from today's live, Kalafina will be making a guest appearance on Tanimura's live in Apr. He has three: Apr 8, 9, 10.