chrisgarci said:
Any kind person that can share a link for a good quality of Yume no Tsubasa from the first FictionJunction album? I am still bummed that there is no official release of that album yet in the Spotify and other streaming platforms in my country, so I appreciate any kind spirit that can share m4a copy...
Click to expand...

I dont know if the quality is good.. yet here it is
link

Hoseki said:
I dont know if the quality is good.. yet here it is
link
Click to expand...

Thanks! This is very much appreciated. I just hope that more of YK’s discography will be distributed on these online platforms. These baby steps sure get frustrating, lol.

Haro everynyan.
Does anyone have Influential Arayashiki and Influential Eraser from the Aquarian Age sphere mini-albums?

@Lorde-Kowz I have all 6 sphere mini-albums. Will pm you later.

Thanks, Kuga~ Take your time.

anyone has those satoyama documentary vids??

@grunty thank you! that is highly appreciated, there some error happened while quoting your post it accidentally deleted your post DX

grunty said:
I'll get back to you when I check...
Click to expand...

thank you so much!!

does anyone have a hq audio rip of yk live vol. 11 fj yuuka special? the one i have is... grainy? idk how else to explain it
H

aki said:
does anyone have a hq audio rip of yk live vol. 11 fj yuuka special? the one i have is... grainy? idk how else to explain it
Click to expand...

This are the ones I have. I don't know anything about sound quality, but they sound good for me

I only just truly realized, it’s July already, and amidst Corona I’ve unashamedly decided to still commit to the Cons near me (one of which I’ve never been to).
I heard ColossalCon (which would have passed, but was moved to September) also has a “ConIdol” competition and so I’ll try to get in. I can usually finesse my way into the finals with Canta Per Me but then I’ve flaked every time.

HOWEVER, in my stupidity, for some reason I’ve never thought to sing something fairly simple (in more than one way) yet equally gorgeous, such as Kaze no Machi he.

But in my opinion, with Kaze no Machi he, even if I solo the group part/outright adlib, I personally think a lot is suddenly lost. So can anyone possibly create a karaoke/instrumental BUT leave the Kajiurago bridge intact?

Not much of a rush, I just hope someone can do it before August is over.

@Hayden K. check my Tsubasa files in the guide thread if that rip is of any use for you. There's unfortunately some cutlery/bar noise before the instrumental bridge from what I remember. If you find that good enough, I'll try editing it to your liking from my original files soonish.

Working on updated Kaze no machi he instrumental now. (On V3 now; if you grabbed that V2 from about an hour ago, I messed up on that one.)
Last edited: Jul 30, 2020

Have any Kajiura related OP/ED songs short/TV size have not been released on CD?

I'm going through the shows and so far I have ripped: Hibari, synchronicity and Kioku no Mori

Edit:
Still looking for lossless/HQ sources:
Egao no Wake (Japanese DVDs apparently had LPCM audio - but finding them might be close to impossible)
Senya ichiya, Kimi ga ita monogatari (AFAIK all DVDs had lossy audio sadly and no idea if they had creditless OPs - the songs in the episodes crossfaded with the actual episode audio)
Last edited: Jul 7, 2020 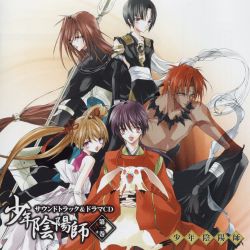 I doubt I'll find the DVD or this one rip with lossless audio that shows up but I'll try...

Appears so - your URL's didn't appear in the message for me, like https://vgmdb.net/album/21575

The egao no wake one appears here. It looks like a weird anime tv-size compilation album.

^ Ιts not the same one as the one that appeared on the anime though, this one looks like Exit Trance style.

george1234 said:
^ Ιts not the same one as the one that appeared on the anime though, this one looks like Exit Trance style.
Click to expand...

i didn't realize there was a preview. Japan is so weird xD.
You must log in or register to reply here.
Top