Preface: I'm not trying to be mean or disrespectful. I just don't get what we're talking about here.


Nightmare said:
Ok pause. I mentioned DEEMO here cause she (Shiho Terada) did the "original" OST from DEEMO movie too. As I said, the DEEMO composers I understood completely they will bring the music from the game as well hence composers. The fcked up thing what happened to DEEMO ost tho is that the announcement of the "original movie ost" was done AFTER the setlist/clarification from Kajiura.
Click to expand...

Wat are you getting at? She was only announced for "theme song" in the initial trailer. Even if she decided to/had to clarify something, there was nothing fucked up about it.


Nightmare said:
And from everyone's information, Mori is the one managed the OST album according to vgmdb https://vgmdb.net/album/117358. I was just baffled at this info that's all.
Click to expand...

Listen, I get being disappointed that we are getting less Kajiura than we could have had she been in charge of the whole thing but all this over a 2 episode drama and DEEMO? It could've been literally anything. From TV-Asahi announcing shit too early before finalizing talks/contracts (be it Kajiura or the previously unannounced Terada; AFAIK Kajiura didn't tweet about it or update the official site until now, despide the first reveal going up before Christmas) to working around some other issues later. Shit happens. Heck, for all we know Kajiura might be doing one full episode, with Terada doing the other.

And do you know what "lying" is? Selling heavily touched up and edited recordings as "live"s.

The more important and relevant question should be: Are TV Asahi dramas/specials getting soundtrack releases?

Also we should be worrying about Kajiura finishing PARADE on time and squeezing "FJ feat. Aimer &/or LiSA" on Kimetsu in April. inb4 FJ song on this special. lol.

grunty said:
Wat are you getting at? She was only announced for "theme song" in the initial trailer. Even if she decided to/had to clarify something, there was nothing fucked up about it.
Click to expand... 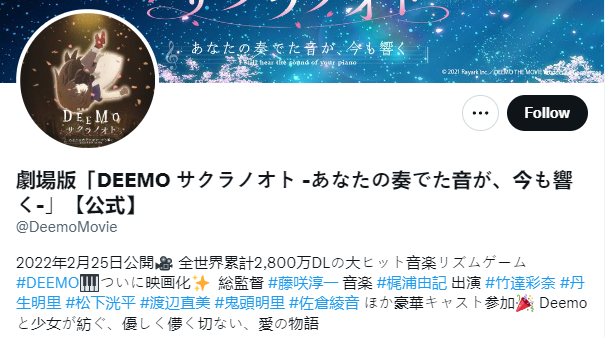 Again, it kinda sucks that she was the only one credited in "music" section. Hoping she did more ost on that deemo movie before the Kajiura drought so it was disappointing on misinformation part. Then it beg the question of why didn't they announced the other composers if the other one did more?

It's more of I "feel" that Kajiura was supposed to be more involved in the OST other than the theme song+Joelle's. And then something happens then hired somebody to take charge.

I just brought it up cause it was the 2nd time Shiho Terada was involved in late announcement. Nothing serious it was only passing thought

grunty said:
Also we should be worrying about Kajiura finishing PARADE on time and squeezing "FJ feat. Aimer &/or LiSA" on Kimetsu in April. inb4 FJ song on this special. lol.
Click to expand...

And then Hikaru went independent and I knew she would be there. fck that album

Nightmare said:
View attachment 25048
Again, it kinda sucks that she was the only one credited in "music" section.
Click to expand...

The actual staff listing (trailer and official site) only had her under theme song from the very start.
I don't think Terada is even listed anywhere (twitter or official site) so if anyone should have an issue with this, it's her.
W

honestly i'm relieved. i mean a cooking show, Kajiura I dunno. imagination can only stretch so far.

though we already have killer track names. so go Kajiura bake that cake!

Shokugeki no Souma / Food wars was cooking show and has a pretty epic soundtrack so its not that Kajiura couldnt make one, besides she already has camomile tea and the fries track from el cazador.

Each episode takes place in a different era, so maybe Kajiura is doing one episode, and the other composer is doing the other episode.