Kagaribi no Hanabira said:
Look like pluie would be sth. very related to I beg you...? I'm thinking of that percussion creepy version of I beg you used in the movie. Or it may be sth. absolutely new that is fit for the intro of I beg you. O__o
Click to expand...

We'll know soon enough but TBH I don't think it's going to be the BGM from the movie because if they wanted to they probably would've used it already like they did on Hana no Uta. (The single/album version of Hana no Uta starts with an edited "now I'm back" from the movie.)

We can listen to "pluie" here:
https://yosound.ru/?song=Aimer+–+Hana+No+Uta&song=aimer+pluie&s=f

It's actually the main melody of HF2.

Don't think it's actually from the movie though? Is it?

Also, pretty weird choice for an album opener. Even before I beg you, lol.

Its as i expected minus the vocals. Seems like we can never escape strings. It still sounds nice though.

Idk if this special variation was used during the movie, as the motif was kind of over-used.
Sounds like a creepier version of "let the stars fall down". Could have been another Kalafina song (like Manten)

Nah this wasn't used in the movie.
I like it. The beginning sounds kinda regal. Kinda surprised that it had solo cello after the strings.

Looking at the credits of Penny Rain https://vgmdb.net/album/83759 #10 "April Showers" strings are arranged by Hitoshi Konno :)

^Sweet!!! Looking forward to it. Mine was shipped, but with RAM. I hope for Yuki to work with more vocalists as well in the near future. Maybe a full album even? (like Joelle could happen) But anyways, looking forward to the album even more now.
R

I feel like I should clarify the exact reason why I hate aimer's voice so much.
I know that rather than saying that she sounded like she's gargling or singing like she's eating potato or holding something in her cheeks is not the most accurate description, but I saw one post that described why her voice sounds so unattractive to me: she sings like she's slurring the words and tbh that's why she sounds like she's singing while holding something on her mouth or singing like her mouth is filled with either water or saliva. This slurring quality to her voice is VERY unattractive and I feel like she actually got more and more stylistic with her slurring singing over the years because she wasn't this bad on her first single. I feel like with her singing she doesn't always hit the right notes at first and drag those notes a little bit up and like someone has also pointed before, her voice suits lower tempo songs more imo because of this tendency of her.

I feel like i'm too harsh with my words about her before but I really am horrible to people I don't like. Even as I write this I still think she's a horribly overrated singer that her only redeeming quality was she sounded different compared to most female japanese singers. I would actually take Wakana's honky vocals over aimer's, anytime.

The live video portion has been posted: https://youtu.be/gzqFUdJAOhg

I’ve only watched Hana no Uta so far (begins around 50:04), and it’s notable because I think it’s the first recorded performance with Aimer’s full band. I think the band doesn’t play it as well as the FBM did in LA, not digging into the rhythms and dynamics as much, and the mix is too muddy. I think Aimer’s singing is smoother without the couple of little intonation lapses in LA, but she seems more zombie-like, less expressive and emotional in this performance, except towards the end. I have the feeling that the upcoming performances this summer will be better.

Hana no uta is giving me karaoke @ TV singing contest realness. The camera work and editing is giving me anxiety.

That final shot in I beg you was very nicely done, indeed.

Does anyone have Sun Dance that they would be willing to share with me please? I only have Penny Rain, and I like Pluie, it's short but sweet, reminding me so much of Madoka.

Which is again? Sorry, I have been out of the loop for awhile. heh

Just google it penny rain and whatever HnA means 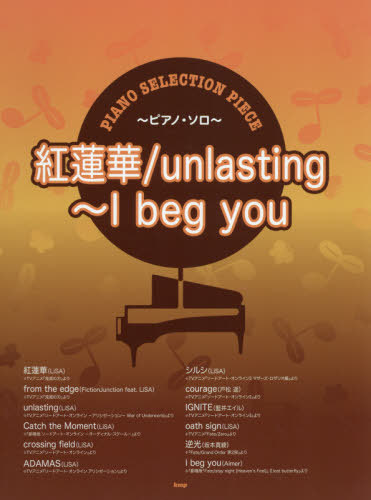 KMP,Gurenge / unlasting - I beg you,BOOK listed at CDJapan! Get it delivered safely by SAL, EMS, FedEx and save with CDJapan Rewards!