Okay, so here begins my record of musician blogs. If I find interesting tweets from anyone, I'll post them here, but usually it'll be just blogs. I'll include posts from Takahashi Jr the bassist, Nozaki Masuke the drummer, and Nozaki Morio the bassist. (Satou-san the drummer and Konno-san the violinist also have blogs, but they almost never update them.)

A lot of these posts are going to be completely off-topic from anything to do with Kajiura-sensei, since these musicians work on lots of other things. Also, I might have a hard time translating the posts sometimes, since I'm still learning Japanese. And I'll probably fall behind on updating a lot. So please be patient 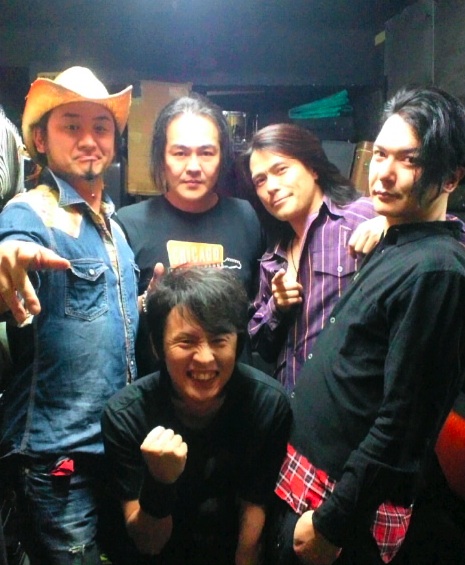 (I don't really know who anyone is, aside from Jr who's wearing the cowboy hat. I think the guy in the purple shirt is a keyboard player, but I'm not sure.)

Last night, everyone who attended, thank you very much!

If you think about it, it's a Cover Night that was postponed for three months out of self-control, so 100 days have passed, yet meeting everyone again was truly as wonderful as it could be.

Last night was exactly 100 days after the earthquake.

Well, after this, I mustn't shed tears. Despite the fact that it's extinguished the candle flame in my lit-up heart.

(I don't quite get this sentence.)
And I'm not becoming positive! (I know that isn't right either.)

Please come to the next Cover Night!
But it still hasn't been decided. (laugh)
Click to expand...

The Cover Night is an event at someplace called Kouenji Show Boat. Jr and his various bands perform there a lot. Sorry for a few strange points in the translation

Jr has two cats, and he draws manga about them a lot. So this is a great example. Unfortunately, I can almost never read his writing

Jr.'s drawing is so cool

Can you read his writing? I'd love to be able to translate that too...

NO.
His drawing is great. But his hand writing....
I've tried, but I can't even read the hiragana one. How can I read the kanji, too?

I think I can read a bit of it. I'm an expert of bad hand writing but it is my first trying Japanese. Repeated things omited

Ok image numer 0 (The one without number)

Image number 1
時間後 (the last one was hard,and mostly by context)
カタ (well the first one seems to be written in hiragana but it looks weird change it if the translation suits it more)
カタッ (first one is the same that in the last word)

Image number 2
そして (yeah context for the first one again, not sure about it)
ピク ピク (thins seems to repeat 2 times here)
ドボ ドボ

このあと
１つ日々に (this one is weird, the most logical order is this one but the text has it on a weird order I wonder if it correctly written.
もどるんだけ！ Not sure about the け)

I hope it helps in translating it a bit

i was looking for korenaga's blog haha

so, does all musician have blogs ?

ninetales said:
Okay, so here begins my record of musician blogs. If I find interesting tweets from anyone, I'll post them here, but usually it'll be just blogs. I'll include posts from Takahashi Jr the bassist, Nozaki Masuke the drummer, and Nozaki Morio the bassist. (Satou-san the drummer and Konno-san the violinist also have blogs, but they almost never update them.)
Click to expand...

^
@zoa : ninetales already mentioned the list of the musicians that have a blog.
Try to read the first part of ninetales' first post before reading the blog, if I may give you a suggestion.

some of my interpretation of Jr's handwriting is right, although I can't post it here.
A

@moichispa: Thanks for the help

murrue02 said:
i was looking for korenaga's blog haha

I wish he had one

I actually read that his grandfather was an artist, so I guess he inherited the talent

So here's the translation of Jr's blog, June 20:

It's either cold or sultry, so I’ve been reverting my short pants to long pants.

I'm waiting for the rainy season.

Well, next week is 'bluesy week'!

Really, it’s Blues Week of its own accord.

And it's secretly increasing, so everyone who's a neko manga fan, thank you very much for always reading with enjoyment.

^ i'm laughing because his blog entry focused on pants and cats, such a funny man xD thanks ninetales!
N

Okay, so today I have the latest posts and (semi)translation from Masuke and Morio's blogs. They are of course the Nozaki Brothers, and I think they're semi-crazy

Since I've returned from my trip, for a period of several days, what's what attacked the thoughts I don't understand.

If something at once should be advanced on, I guess I should've somewhat hoped for it.
The place is really exactly opposite.
Everything retreated.

What I perceived in the place that I didn't understand, one answer was left behind with ("Patsun"? A person?).
What I'd picked up, perhaps it was something I'd expected.

It was one important thing.

I honestly think Masuke should've been a poet. His brother does the same thing sometimes...I think they're writing verse instead of blog posts

And, when I can actually translate it properly, it sounds really nice

I have no idea when he went on this trip or where he went to, since I haven't really been keeping an eye on him very much. To tell the truth, I doubt he even said where he was going on his blog...

Everyone who came yesterday, thank you very much.

As for next time's live, maybe, before next year's (something), it'll be announced.

So today is the round-table discussion.

A little explanation: Morio has his own band, Fuzz Factory, and he does pretty much all the publicity for it himself. Apparently he was making T-shirts this time. And also, he's been doing a series of events where he goes to local Tokyo clubs and talks with...well, any fan who's willing to pay a few thousand yen to talk to him. Hence, 'round-table discussion'

Sorry about that weird spot in the translation. Morio usually loses me after a few sentences, because he uses next to no punctuation and constructs his sentences rather strangely, at least compared to Jr. Maybe it's because he's originally from Kanazawa??

Thank you so much for translating,

these seem to be interesting people, yet too few fans talk about.
S

i kinda misread the title for an instant


Shin said:
i kinda misread the title for an instant

So what did you read? 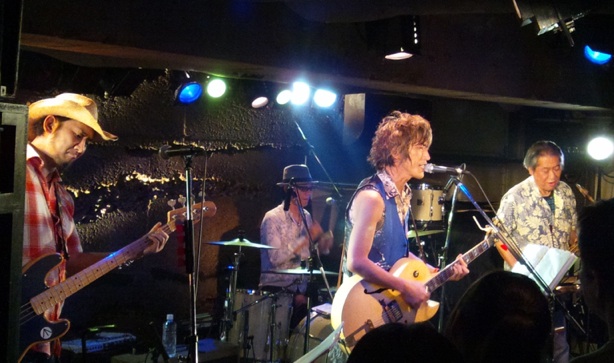 He's performing with Miyake Shinji Band here. Miyake Shinji is the guy with the Gibson guitar and the sleeveless outfit. And as always, Jr's wearing a cowboy hat

Managawa Marina's (violinist) blog post about Kalafina Lacrimosa (looks like she bought it (she has played violin at some of their lives).

^ Thanks for posting! I'll try to translate it ASAP

In the meantime, here's the translation of Jr's blog, June 25:

This weekend, we're seeing off the pattern of Blues Week from the first part to the last part.

Well, last Wednesday, in Miyake Shinji's "Blue Day" at Every Wednesday, a secret guest made an appearance.

It was the usual Miyake Band with a different menu, plus Katayama-san!
The 'deep' blues was so much fun!!

As for this year, since I decided to participate in FUJI ROCK, I was in high spirits about it.

With the appearances we made, and doing music that wasn't the usual thing, it was a very fresh feeling.

Blues is absolutely the best.

So at Every Wednesday next week is Miyake-san's solo, "ORANGE&PINK NIGHT".

Ugh, it was impossible to participate in the rehearsal I wanted to go to.

For this day's after party, we had two and a half round trips of shochu on the rocks(?). (Thanks Keiri!)

So apparently, Jr had to miss one of the FJ rehearsals to do this live. I hope he practices hard to make up for it...

I have no idea what FUJI ROCK is, since he's never mentioned it before. And I don't know who Katayama-san is either

And does anyone know what 'norinori' means? It must be one of those adverbs like 'dokidoki', but none of my dictionaries list it

Huge thanks to Keiri for answering my questions

Oh yeah, there's a new blog from Jr, too 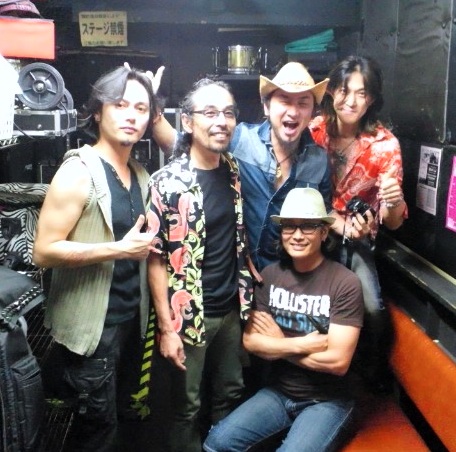 Translation in progress, but I can translate the last sentence before the schedule:

"And after that is Kaji-chan's WEEK!"

So cute how they call her Kaji-chan


ninetales said:
And does anyone know what 'norinori' means?
Click to expand...


Thank you for taking the time to translate the musicians' blog entries, ninetales!

Wish I could help in some ways but I hardly have spare time to do any of these properly so your hard work is greatly appreciated!