So apart from his works for Attack on Titan, Kill la Kill and Aldnoah Zero which sound samey in some parts, I also listened to the Marks no Yama and "Box!" soundtracks (you can find both at hikari no akari) which are quite different from the ones menthioned before and closer to the kajiura style, the tracks there have violin, piano, accoustic guitar, and and a bit jazz etc and I definetely recommend them :)
C

Thanks for the recs george!

I really like his Gundam Unicorn OST. He did Ao no Exorcist OST too, but I haven't had time yet to listen through it properly. He also has an NHK OST collection, similar idea to Yuki's Works for Soundtrack CD I think. At time I can hear similarities to Kajiura but I think he has an overall more 'Hammy' sound

if that makes sense. Like, he's epic on a bigger scale whereas Kajiura's more delicate/refined/'girly'-sounding to me. I figured he also has a pattern of using certain vocalists like Mika Kobayashi, Cyua, Aimer, Aimee Blackschleger etc., but I actually prefer Kajiura's vocalists over most of them.

I've only started listening to him recently though, so I don't know too much about him. Anyone have recommendations of his other works?

The 2 OSTs I recommend up there have normal, english titles. As well as not combined unrelated tracks. I guess he started those strange names to be more unique compared to other composers, but some of these names do make sense, for example :

As for the vocalists, I think they are pretty good, its just the style of songs he asks them to sing thats a bit weird, as its more american in energy and there are mostly in english or german, kinda few in japanese. From those, I have ended up liking Blumenkranz,
Vogel Im Kafig ( this one reminds of lord of the rings XD), Bauklötze, and the 2 Aldnoah Zero songs.

I will have to check out the rest of his OSTs too. I think a collab of him and Kajiura in an anime would be an intersting experience.

I just started watching Nanatsu no Taizai | The Seven Deadly Sins and recognised his music! He seems to have a more traditional touch to this soundtrack :) http://anilinkz.com/series/nanatsu-no-taizai-the-seven-deadly-sins http://www.animenewsnetwork.com/encyclopedia/anime.php?id=16167 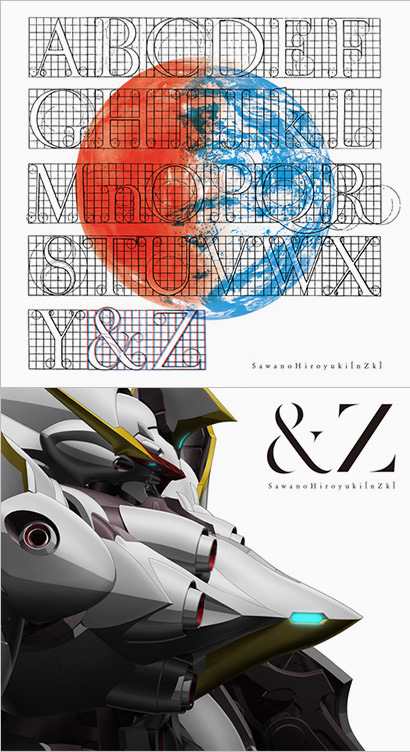 Damn how does he always manage to release his stuff standalone even with Aniplex ??

Well, in all fairness - he only got one standalone release per show since Guilty Crown (with more being released as enclosures). I guess they sell decently.

But back to the Nanatsu OST - it doesn't really offer anything new from Sawano to me. Just changed a couple of instruments to the whistle and bandoneon in his usual compositions. Couple of the tracks could've been on Aldnoah OST just as well. :p I did like Perfect Time, except for the hilarious reading.
Last edited by a moderator: Dec 21, 2014

^ but if Im not wrong, Attack on Titan, Kill la Kill and Aldnoah all had standalone


grunty said:
he only got one standalone release per show since Guilty Crown (with more being released as enclosures).
Click to expand...

Having a listen to some Mika Kobayashi singing music of Hiroyuki Sawano:

and Mika Kobayashi with Hiroyuki Sawano:

that girl has strange face, as if it was put in a press machine when she was little

but has good voice

^ I wasn't sure that the first clip actually included Hiroyuki Sawano performing.
K

Mika is such a good vocalist! Sawano knows how to recognize talented ones.

So &Z and his Best of Vocal Works collection are out

I dont understand why the english ver of &Z is between the japanese song instead of standalone.

In the collection, best tracks IMO are: #3, 5, 6, 14 . i am sad that Bauklötze, Call your name and Vogel im KΕfig, didnt make it since they where my favs from AoT.

that girl has strange face, as if it was put in a press machine when she was little

omg George why did you have to say it like that

Her voice is nice but it's typical American pop voice imo, nothing unique. I think what makes me still sticking with Kajiura is her choice of vocalists. The girls have distinct/unique voice and I don't think I've ever heard someone like them before. Even Hikaru and Kaori whose voices are the closest to typical j-pop singers's voice are still quite unique on their own.

Anyway those are some nice performances (even though I don't really like most of the songs) was the song really like that or was the tempo really messed up in the LisAni live-4 video?

^ Lets not forget about Maya and Chiaki, both with unique voices too. Too bad we could hear Maya only in 4-5 songs (from the vol#2 live act, and sprinter). Yuuka and Saeko have the less unique ones, but I still like them alot :)

that's what came to my mind when I saw the performances

So it probably wasn't until the third or fourth time around watching it that I realized he was the series composer for Sengoku Basara. This was a little bit before he reached his current heights of popularity post-AoT and KlK, but there's definitely that sense for the dramatic and building up moments to (for lack of a better word) epic levels.
The use of vocal performances have a old Japanese sensibility, probably to match the Warring States setting of the show, though there are tracks with Western vocals.
Sengoku Basara is such a ridiculous, over the top show to begin with both visually and story-wise, I hadn't realized just how much the music builds on it, but I'm going to have to look into getting it.
In any case, if you're a fan of Hiroyuki Suwano, watch Sengoku Basara to get the grandiose and dramatic style but with less use if electronic/synthesized sounds you hear from Attack on Titan or Guilty Crown.
J

It was announced a few months ago the Hiroyuki Sawano will be doing the OST for the upcoming Wii U game Xenoblade Chronicles X developed by Monolith Soft. Monolith Soft was also the developer of the Xenogears as well as the Xenosaga games which Kajiura worked on.

I'm not familiar with Xenoblade nor Xenoblade Chronicle X until Shulk appeared in the recent Smash Bros 4, I really love the music from Xenoblade featured on Smash Bros 4.

This is the battle theme for Xenoblade X https://www.youtube.com/watch?feature=player_embedded&v=7Apdfz4HNrY
It was good at the start until the rap came in.
You must log in or register to reply here.
Share:
Share
Top