A survey for the fans of Kajiura Sensei

I'm taking a Japanese course this semester, and there's a final speech project. Among the topics I chose "Japanese songs", for which I eventually decided to introduce Kajiura/Kalafina to the class. There's a part in the speech where one is expected to do some investigation and share the results with graphs, so I made a small survey for the fans to serve this purpose.

I already got some samples from the Taiwanese fan group I'm in, but I think it would be great if I can also collect information/ideas from people other than Mandarin speakers. That's also one of the reasons that get me here.

The survey will be mainly focusing on Yuki Kajiura and Kalafina, since I would also like to focus my speech on these two. It'll probably take about 5-10 minutes, depending on your answer to the open questions (Based on the feedback I get until now, picking your favorite three songs might be a difficult one). The Mandarin explanation will also be there besides the English one since I make it with Mandarin at first and decided not to separate the two versions.

I hope you enjoy the survey and feel free to leave any comment and feedback to me in the survey (or here). I appreciate your time! 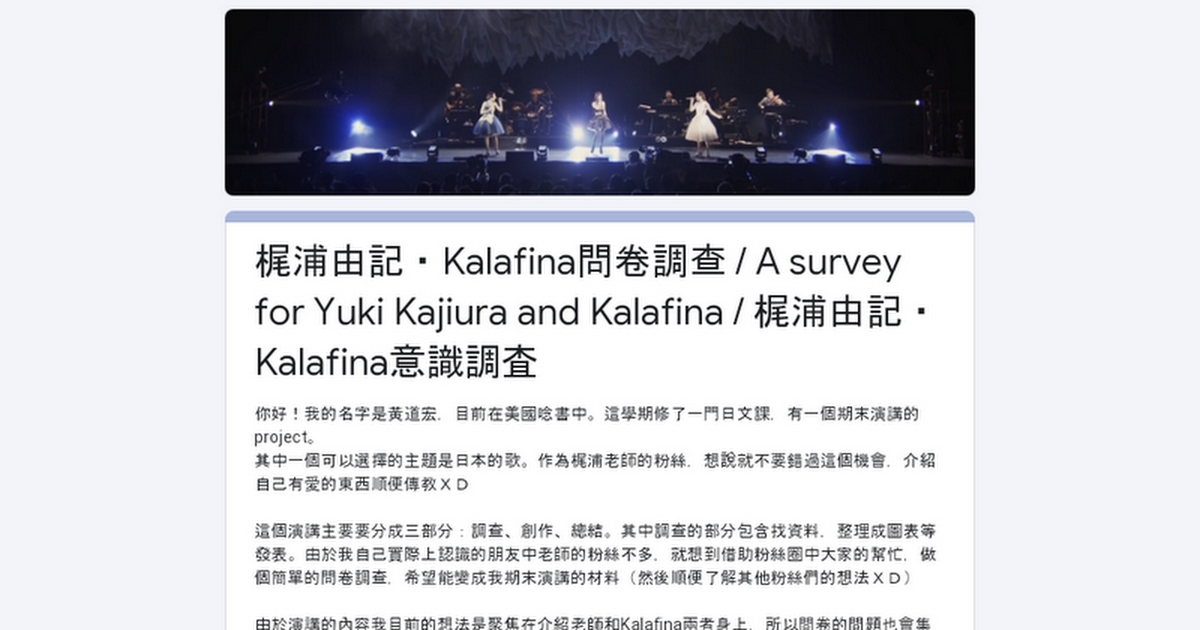 Why not include see saw and fj stuff too ? Kalafina is dead anyways.

george1234 said:
Why not include see saw and fj stuff too ? Kalafina is dead anyways.
Click to expand...

Because he likes Kajiura and Kalafina? And, outside of lives, See-Saw and FJ are pretty much dead too, hue.
K

george1234 said:
Why not include see saw and fj stuff too ? Kalafina is dead anyways.
Click to expand...

You're right. I could probably also include FJ in the survey (I don't know that much about See-Saw myself though). But due to the time limit of the presentation I probably wouldn't be able to talk about everything, so I probably would still focus on Kalafina anyway.


Lorde-Kowz said:
Because he likes Kajiura and Kalafina? And, outside of lives, See-Saw and FJ are pretty much dead too, hue.
Click to expand...

I also like FJ a lot and there are quite a few songs that I love. I do listen to Kalafina's songs a lot more frequently than FJ ones recently though. I guess that's why I decided to focus more on Kalafina.
You must log in or register to reply here.
Top